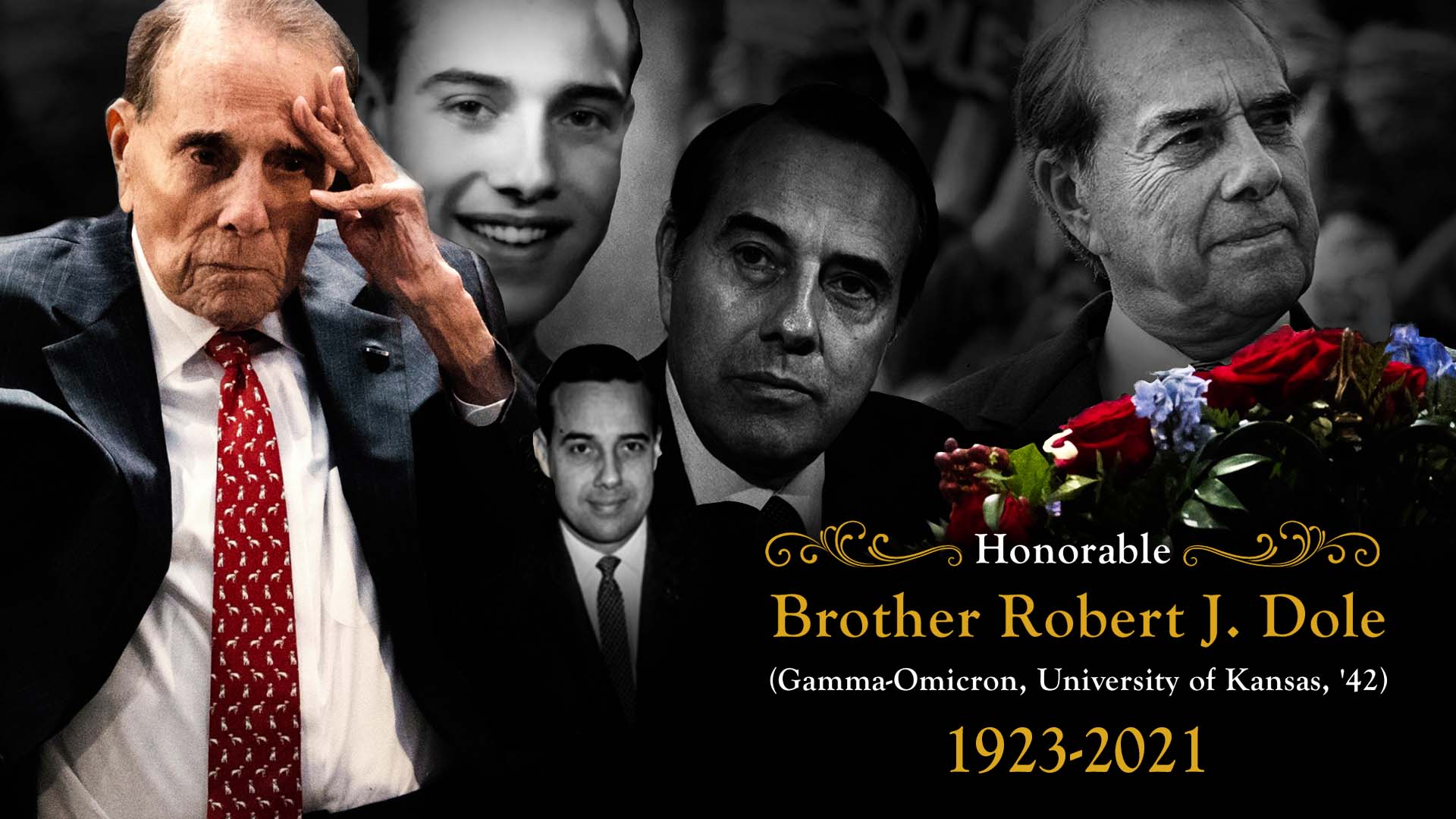 Brother Dole was initiated into the Gamma-Omicron Chapter of Kappa Sigma at the University of Kansas on October 4, 1942. Brother Dole served in the United States Army during World War II and became a 2nd Lieutenant in the Army’s 10th Mountain Division. In April of 1945, Brother Dole was wounded in combat while engaged with the German Army in the hills of Northern Italy. Brother Dole was decorated three times for heroism, receiving two Purple Hearts for his injuries and the Bronze Star with Combat “V” for valor for his attempt to assist a downed radioman.

President Gerald Ford chose Brother Dole for his running mate as Vice-President in the 1976 election. Brother Dole was also the Republican Nominee for the 1996 presidential election. While on the campaign trail, Brother Dole stopped along the way to many Kappa Sigma Chapter Houses and Chapters to share fellowship and Brotherhood. He was the keynote speaker at the 56th Biennial Grand Conclave of Kappa Sigma in Indianapolis in 1987.

In 2010, Kappa Sigma and the Fisher House Foundation dedicated a Fisher House at the VA Hospital in Washington D.C. in honor of Brother Dole. Brother Dole’s wife, Senator Elizabeth Dole participated and spoke at the groundbreaking and cornerstone dedication ceremony. This was made possible through the hard work and efforts of Chapters of Kappa Sigma Fraternity through the Military Heroes Campaign. This achievement was a most historic moment in the history of the Order and recognized a great patriot and leader in the history of the United States.

In 1991, Brother Dole delivered the eulogy at the funeral of Brother John G. Tower, Past Worthy Grand Master, and fellow United States Senator. He recalled Brother Tower’s love for the United States and his love for the Kappa Sigma Fraternity. In his remarks, Brother Dole read the Star and Crescent and how those words reflected the character of Brother Tower. It was a moving tribute to all Kappa Sigma Brothers, the words of the Star and Crescent are also a tribute to Brother Dole, who taught Kappa Sigma Brothers the importance of service above self.

Brother Dole loved the Kappa Sigma Fraternity and always enjoyed visiting with Brothers in discussions on the progress and pride in the Order. He will remain in our hearts forever.

The Brothers of the Kappa Sigma Fraternity extend their most sincere condolences, thoughts, and prayers to the Dole Family.