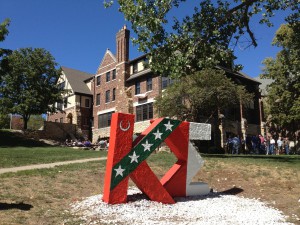 As we should all know, the Gamma-Omicron Chapter of The Kappa Sigma Fraternity was founded at the University of Kansas in 1912, thus making 2012 our Centennial Anniversary. Planning for a Centennial celebration began more than a year in advance, and culminated in the Centennial banquet held on September 22, 2012. There was a whole weekend of activities leading up to Saturday night’s feast, beginning with “era reunions” on Friday night.

Each era (five-year period, such as 2000-2005) had a designated captain, whose role it was to organize a reunion on Friday night. Different eras met up all over Lawrence for the night in order to catch up on post-fraternity life while also reliving the college days. I know some groups met at a brother’s house for dinner and drinks. I was part of a group of young alumni that ate at The Bird Dog restaurant inside the Oread Hotel. Right next to us was a large group of alumni from the late 70s and early 80s. After dinner, most people headed to the classic KU bars: Bull, Hawk, Wheel.

There were some tired faces the next morning at the Dole Institute, where we had arranged a private tour of the facility and its memorabilia. Robert Dole ’42, undoubtedly our most visible alumnus, donated his congressional documents from 35 years of service to KU, and in 2003, The Robert J. Dole Institute of Politics was opened in West Campus. The private tour took us through the museum-like foyer and assembly hall. This is the same place where the 2008 Man of the Year Banquet was held for brother Alan Mulally ‘64. Part of brother Dole’s incredible story are the years he spent at Gamma-Omicron, therefore the Dole Institute displays several items with the Kappa Sigma crest. There are lots of items not on display that were brought out for the private group. Any Gamma-O brother who has not visited the Dole Institute should make a stop next time they are in Lawrence.

Following the tour, alumni from all generations met at the chapter house for lunch and KU football. BBQ was catered by Biemer’s BBQ and a cash bar was set up in the basement. The weather could not have been more pleasant, and most people spent the afternoon outside. Lunch was excellent, and drinks were plentiful. Our famous game, beer darts, started on the back lawn, and teams consisting of both old and young alums took turns on the field of play. The Kansas Jayhawks football team was playing an away game at Northern Illinois, and at kick-off most people went inside. Sadly, the boys blew a fourth quarter lead, but fortunately we had the evening’s banquet to take our minds off the loss. 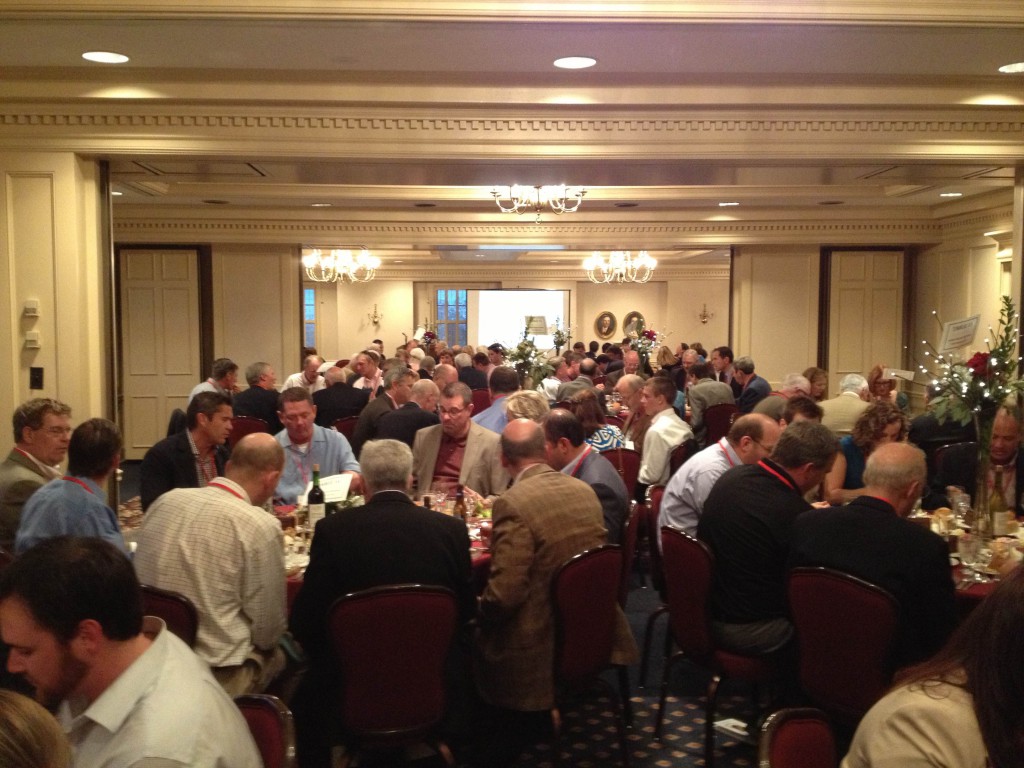 The banquet was held at the Adams Alumni Center. The first floor served as a staging area with cash bars and hors-d’oeuvres.  In all, almost 200 people attended the banquet. Tables were setup in several adjoining rooms on the second level of the Alumni Center. After dinner, five different speakers gave presentations on various topics. First, Reed Hoffman ’41 spoke about his memories of living in the house during WWII. Also, his father was a founding member of Gamma-Omicron, and brother Hoffman recently donated countless Kappa Sigma documents and items he had collected. These are now on display in the chapter house. Following brother Hoffman, Becky Schulte (University Archivist) spoke on the history of the Jayhawk, which also celebrates 100 years at Kansas in 2012. Third was Dale Seuferling from the endowment Association who talked about the importance of private donations. Following Mr. Seuferling was our Worthy Grand Master, Christian Nascimento. He spoke about the history of the fraternity, the founding of the Gamma-Omicron Chapter, and the future direction of Kappa Sigma. He also presented awards to alumni for 50 and 60 year anniversaries of initiation, and presented Gamma-Omicron Corporation Board President Dave Steen with a plaque commemorating the Centennial. Finally, Tim Caboni, Vice-Chancellor of Student Affairs, wrapped things up with a short speech about the future of KU and the importance of Greek Life to the university. The night ended with the Kappa Sigma Chorale, and brother Steen, leading everyone in singing of the last verse of “Come Gather All Ye Merry Men”.

It’s fair to say the Centennial was a great way to end 100 years of Gamma-Omicron, and to set our sights on 100 more years at Kansas. One great way to ensure future stability for Gamma-O is through rush recommendations, and donations to the Scholarship-Leadership fund. Rush recommendations can be submitted here on the site or emailed to Dave Steen anytime at steen-d@sbcglobal.com. One way the chapter means to keep quality men is through financial awards for brothers with good grades and better chapter leadership.